They roll and they bend light in shadow and warmth and I love exploring these with my photography.
Read More 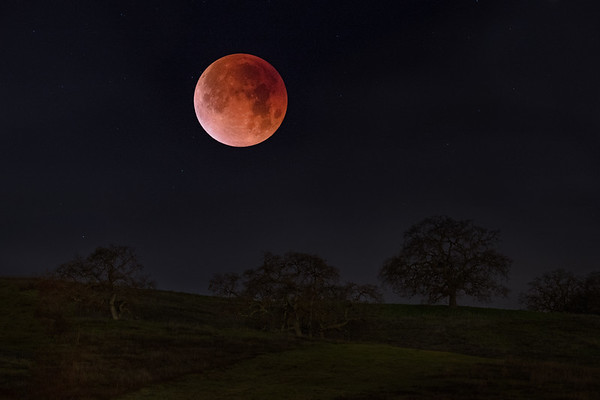 Lunar Eclipse over Oak Tree and Hills Silicon Valley, California While a lunar eclipse isn't quite as rare as a solar eclipse, it can still be fairly neat to see. When I witnessed the solar eclipse in August I planned for months on where to go and how to see it. For this lunar eclipse, which occurred on January 30, 2018, I didn't plan as far in advance. What's special about this lunar eclipse is that it's basically an ultra-rare "Super Blue Blood Moon Eclipse. What that means is there's a lunar eclipse (moon eclipse) that occurs during the second full moon of the month (Blue Moon), and it's also during a point in the orbit when it's very close to earth (Super Moon). The "blood" part comes in because the solar eclipse makes the moon appear red. Willie and I decided the night before that we would drag our butts out of bed and go photograph it. Since the moon was going to be fairly high in the sky it made things hard for aligning the moon with San Francisco and we opted to stay close to home. Our plan was to try to align the moon with some trees. Both of us arrived just before the moon went into total lunar eclipse and we spent almost an hour taking photos of the moon and the sky, while the moon was still too high in the sky to frame with trees. Just before 6am we got into position and waited as the moon finally dropped above the trees and we were able to take a snap. The moon has not been enlarged in photoshop -- this is exactly how my 600mm lens captured the moon. I captured a second, longer exposure to get the foreground to start to be visible and blended the two. Nikon D800 w/Sigma 150-600mm Moon: 600mm, f/8, 1.0 sec, ISO 1600 Foreground: f/9, 30 sec, ISO 1600