My aerospace background is hard to ignore when the Milky Way comes out in the night sky and my camera is nearby.
Read More 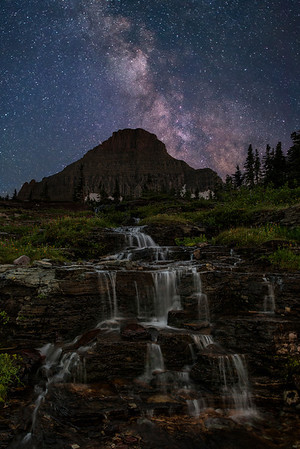 Glacier Milk
Milky Way over Mt. Reynolds Logan Pass, Glacier National Park, Montana When Willie, Alan, and I set out to spend a week in Glacier National Park we prepared for all kinds of weather. I purchased new rain gear, rented a 24mm f/1.4 lens in the event of clear skies or auroras, and kept my hopes up that the partially cloudy skies in the forecast would lead to beautiful sunrises and sunsets. While doing research for the trip it quickly became evident that most of our time would be spent in Logan Pass. On this particular evening our hopes at an epic sunset faded quickly and not a cloud could be seen in the skies. We gave up on sunset and switched gears .. it was time to use those rented lenses to photograph the Milky Way. A copious number of streams, rivers, waterfalls, and small patches of wildflowers awaited my every turn and provided countless possibilities for compositions. Using the StarWalk app on my iPhone I was able to roughly predict the path of the Milky Way. I quickly saw that the Milky Way would line up almost parallel to the right side of Mt. Reynolds with the core of the Milky Way in between the mountain and the trees. Perfect! I experimented with a variety of compositions but ultimately settled on 2 waterfalls that I liked. I loved the way the waterfall cascaded down from Mt. Reynolds and provided an interesting foreground. It's almost like there's steps leading us right into the sky! I then waited ... and waited ... and waited ... the sky never seemed to get dark enough for the Milky Way to come out. It had not dawned on us that being so far north would leave the sky so bright for so long into the night. Slightly before 11pm the Milky Way first made its appearance on the back of my camera. By 11:30pm the Milky Way finally moved into position. Just as I had predicted the Milky Way lined up perfectly with Mt. Reynolds and the core filled the right side of the sky! Another photo in my "Milk" series! It was then a race to pack up, get to the car, and try to catch the 2am opening in the road closure so we could catch a couple hours of sleep before waking up and starting all over again. As you'll notice the sky doesn't entirely look as sharp as it could. I rented the lens from BorrowLenses and it quickly became clear that this particular copy of the lens had some serious coma flare issues. I did my best to get rid of some of it but eventually removing it became tedious and I gave up. BorrowLenses customer service was awesome and I was given a coupon for the price of the rental to use another time! Nikon D800 w/Nikkor 24mm f/1.4G ED: Sky: 24mm, f/1.6, 13 seconds, ISO 3200 Foreground: 24mm, f/10, ISO 100