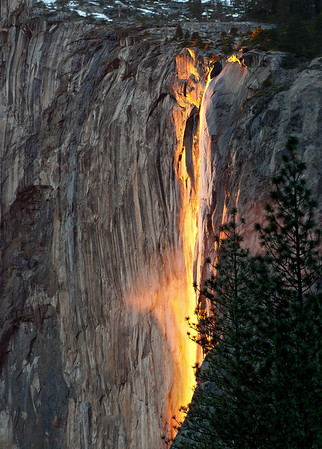 Destroyer of the One Ring

Destroyer of the One Ring
Horsetail Falls, Fire Falls Yosemite National Park, CA For two weeks every year Horsetail Falls, in Yosemite National Park, becomes one of the most sought after spots to photograph. Made famous by Galen Rowell in his "Natural Firefall photograph" (Ansel Adams did document this photograph but as a black-and-white landscape photo), many photographers (including myself) try to duplicate his effort. Situated on the northern side of the valley, and at the extreme eastern end of the El Capitan monolith wall, the falls catch the last rays of the setting sun for only about one month of the year.  At midwinter, the sun sets below the southwestern rim.  As the year progresses, the sun sets a bit further north along the western horizon.  By the end of January, if you are standing at the El Capitan picnic area parking lot, you can see the sun setting in the Gunsight, the V between Cathedral rocks on the eastern side of Bridal Veil Falls.  By the first few days of February, it sets to the right of the lowest Cathedral rock.  Provided the sky is clear, the sunlight illuminates the entire El Capitan North America wall, and if you are in a position east of the falls, it backlights the water, making it glow with amazing colors In mid-to-late February each year, when the atmospheric conditions as well as the angle of the sun, hit Horsetail Falls just right, the entire falls look as if they are *ON FIRE*! In order for the falls to burn you need sunlight (the clouds can't be blocking the setting sun), and water (which occurs when the snowpack above El Capitan is melting). There are 3 places that you can easily view Horsetail Falls. The first, and most popular, is the El Capitan picnic area (on Northside Drive). This provides the closest view, but it's at further east and a harsher angle and some people didn't see the falls light up from this spot while the other locations did. The two other locations are along Southside Drive, with the best spot being where we snapped away (GPS coordinates 37.72783,-119.609). We got to Yosemite at about noon on Sunday, hoping that the incoming storm would keep the clouds away and light up the falls for us. We scoped out all 3 locations and decided that the Southside Dr location was best. We arrived back there at 2:30pm, which was just in time, because photographers were starting to line up and we had to rush to claim a good spot. We made friends with the photographers around us -- which was a good thing because we had 3 hours to kill while the sun set. Peak "Firefalling" was supposed to start at 5:22pm but clouds had settled in and we started to get sad that we drove/waited all this time for nothing. At about 5:31pm we noticed the bottom of the falls started to glow. Sure enough a couple seconds later the clouds parted and the entire falls lit up on fire, right before our eyes! We had 7 minutes to snap our hearts away (and stop and just gawk at this amazing site) before the sun set and the firefalls returned to waterfalls. I rented a Nikkor 70-200mm f/2.8 VR for this shoot. I wanted to make sure I got the sharpest images possible. I stuck my old 70-300mm lens on my D80 and an extra tripod and snapped away with that as well. I should have paid more attention to my good camera/lens because I made some silly mistakes (like allowing the photos to be over-exposed) due to my running back and forth between cameras. I hope you enjoy these photos of Horsetail Falls (Fire Falls)! Destroyer of The One Ring Taken on February 13, 2011 at Horsetail Falls in Yosemite National Park, CA