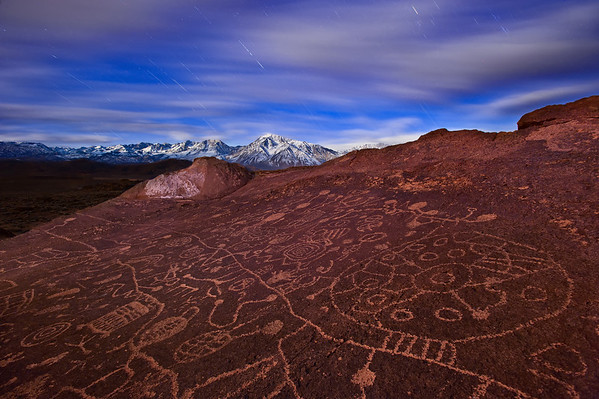 Silver Haired Ancestor
Startrails and Ancient Petrogylphs California After poor planning cancelled a trip to Utah, Willie and I decided to head down to Death Valley instead. We brought along my friend Zack and were pretty excited to explore and get some great photos. Unfortunately, one of us must have really upset Mamma Nature because we got skunked for pretty much every photo we tried to take. We left DV on Saturday morning and were off to find some ancient petroglyph formations that faced snow covered mountains. After finding the parking spot, going on a nasty little hike, and doing some bouldering we finally arrived at the petroglyphs. We weren't quite sure we'd be able to find it so we arrived reallllllly early (like at 1pm for a 5:45pm sunset). Sure enough, we found it almost immediately! What an amazing site! These petroglphys, which are about 5,000 years old and one of the only ones that face the sky, sit on top of a block of volcanic rock and dozens of petroglyphs are carved into the rock, perhaps by ancestors of the Paiute (or Shoshone-Paiute) people. It's about 15 or 20 feet tall, somewhat bowl shaped, and slightly steep, perhaps about a 40 degree slope (which made standing for photos difficult). We thought we'd be the only ones there but were quite wrong (that seemed to be the theme of the trip … just wrong about everything!). A group of locals joined us for a couple minutes and then left as another large family joined us and eventually left. For a while we had the place to ourselves and used the time to get our compositions perfect. Surprisingly, around 3pm another set of (professional) photographers showed up and we had to squeeze in so that all 5 of us could get photos. It was pretty amusing, with one guy pretty much dangling off the rock! With our tripods setup we waited for sunset. Mamma Nature had not been nice to us during the trip but the 2 other photographers had been lucky all week, getting great skies the entire time, and we hoped their luck would turn our fortunes. Unfortunately, Mamma hated us more than ever and brought in some awful big clouds that blocked the sky from lighting up and we went home empty handed. So much for sunset! After eating dinner we looked back at the skies and saw it had cleared up and thought "hey, lets go back and do star trails!" So off we go, with a whole lot of extra clothing, back up the nasty little hike and to the petroglphys. Willie brought some yellow tissue paper to diffuse a LED flashlight and we light painted the rock and then took a 30 minute exposure for the startrails. Willie manned the flashlight while I clicked off our shutters and tried to block the wind from shaking our cameras. It took a couple tries but we finally got the light painting thing down and then were able to move on to our 30 minute startrails. Yet again, Mamma Nature tried to stop us and rolled in a bunch of clouds just as we started the 30 minute exposure! It ended up creating a neat little effect, with the startrails being intermixed with clouds. I thought it made the startrails look like little silvery strands of hair! After the shot, we packed up and finally got to bed at about 12:30am. Being as crazy as we are, we woke up again at 5am, hiked back to petroglyphs for a 3rd time and tried for a nice sunrise (again, a failure). At least we got this shot and we had an amazing trip regardless! Nikon D700 w/Nikkor 17-35mm f/2.8 ED-IF AF-S: 17mm, f/7.1, 30 min, ISO 200