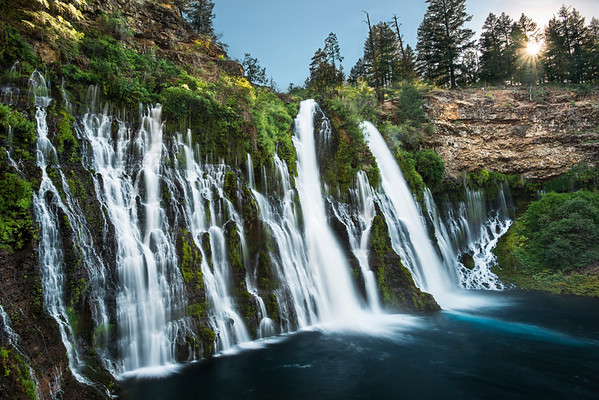 Burney Falls Burney, California Many times during my photography career people come up to me and ask "Why aren't you taking a picture of this? It's so pretty!" One of the things I learned early on was that often times scenes that are pretty to the eye unfortunately don't make great photos. Scenes are too busy, they're too grand, or they lack a main subject. This was the case when Willie and I arrived at Burney Falls. We took one look at it and said "WOW!!!!" But as we got down lower and took out our cameras we started to scratch our heads. No wonder we didn't see many good photos during our research. It's not that it hasn't been photographed, it's that it's really hard to photograph well. The place is just *too* grand. Blue skies didn't help either. As I was shooting I noticed that the setting sun was positioning itself perfectly in the trees. I managed to snap off a few shots before the sun dipped completely behind the trees and cliffs and was hidden for the rest of the evening. Lightstars streak out from the sun as the trees provide an edge to refract off. Foregive me for the horridly boring sky but I found Burney Falls so breathtaking that I just had to post a photo of it. As Alan will say, this is "Caca Dudu" (his term for BORING) but who cares -- it's a gorgeous place and I want to motivate everyone to visit Burney Falls if they're in the Shasta area (or make a trip to go see it). I made sure to include the entire waterfall, to give you a sense of how giant and large this place is! Nikon D800 w/Nikkor 17-35mm f/2.8 ED-IF AF-S: 20mm, f/22, 0.8 sec, ISO 320