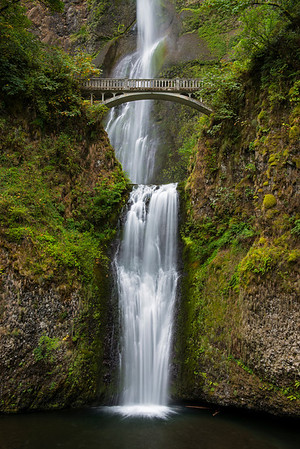 Multnomah Falls Columbia River Gorge, Oregon I was in Portland for a friends bachelor party and about all we did the entire weekend was drink beer. My friends are quite the beer snobs and despite landing slightly before 11am our first stop was to the bar to drink beer and eat brunch! Knowing that we had plenty of beer drinking ahead of us I managed to convince the gang to take a little trip to the Columbia River Gorge. I was the only one who brought hiking clothes -- anything but a quick trip to Multnomah Falls was wiped out. Then again, it started to pour and that sucked any last thoughts of doing a hike right outa my head. The rain turned out to be a blessing at Multnomah Falls. There was still quite a crowd but it did thin out a bit as the rain came down. A trusty rain shield for my camera and I was all set to shoot. The cloudy skies made for perfect even light on the falls and the extra bit of precipitation allowed for a nice flow of the falls. What makes Multnomah Falls so unique is the bridge above the lower falls. Without it the place is "just another waterfalls". People were crossing the bridge the entire time I was shooting but I kept shooting anyways. I used 10 different shots to blend out the people and make the scene appear empty! The whole place, with the waterfall, the green trees, moss everywhere, and the bridge, reminded me of Rivendell from Lord of the Rings. Can't you just picture yourself entering the elven city?! Nikon D800 w/Nikkor 24-70mm f/2.8G ED AF-S: 38mm, f/16, 0.8 sec, ISO 100